大切なのは音楽そのものが伝わっているかどうか。無心で自分を捧げれば、個性は後から付いてくる。
Posted by Yutaka Uchida at 6:34 PM No comments:

Aki Yamamoto and The Archi-tet

On "JAZZ... MAKE IT A DOUBLE" on October 22nd, MUSOH will share the bandstand with The Archi-tet, a wonderful mid-sized ensemble led by my good friend Akihiro "Aki" Yamamoto.

My first experience of playing jazz was to join a college big band, so I have always enjoyed and appreciated playing in large ensembles, although as a composer I tend to write for small groups more often. The Archi-tet boasts gorgeous harmony of three horns for which Aki carefully and tastefully prepares his charts. It is a very flexible setting where you can have the well structured arrangements as well as the room for spontaneous improvisations, so the listeners can really enjoy the best of both large and small ensembles.

When you listen to our works, it may seem that Aki and I take entirely different approaches on creating music. But the differences are only stylistic and superficial. I actually find his philosophy and attitude towards writing and shaping ensemble very similar to mine. We compose and arrange from producer's perspective and believe in compositions drawing big pictures rather than being mere vehicles for individual expressions. We write, arrange and direct according to the messages, tales or visions that we would like to convey, and it is our job as band leaders to present those in every step of the way. This type of approach, when done properly, makes every solo relevant, every tune coherent, every set thematic and ultimately, every show memorable and meaningful - so I believe.

As a drummer, I also enjoy being a part of this machinery that translates Aki's visions into sounds. Sometimes he requests something that's challenging, more so on conceptual level than technical, but usually once you hear it, you get it, and it's beautiful. You see, Aki the composer is the architect and we, including Aki the bassist, are the craftsmen who actually make his dream reality through our own skills and creativity.

I'm very glad and proud to have Aki and The Archi-tet on this show and I know I will have a blast. And I know that you will enjoy his fantastic tunes, too!
Posted by Yutaka Uchida at 1:42 AM No comments: 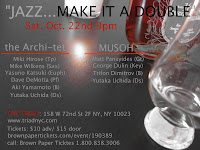 Posted by Yutaka Uchida at 12:54 AM No comments:

As I have been announcing everywhere, we are throwing a double-bill show entitled "JAZZ... MAKE IT A DOUBLE" on October 22nd at The Triad.

On this show, I am reintroducing my "electro-acoustic" quartet format of guitar, keyboards, bass and drums, which I originally formed in 2005 and wrote a bunch of pieces for. Soon after I started playing with completely acoustic quartet featuring a saxophone in front, mainly because the owner of the club that I used to play gigs insisted that he wanted a horn in the band.

It actually worked out pretty well and made some solid musical statements. Some tunes that I originally wrote for the "electro-acoustic" quartet ended up being recorded with the acoustic quartet for my album Living Together. And I've written some more tunes specifically for the format that I would like to record some time in the future. My gratitude to all the horn players who have played my music and made a lot of contribution, especially saxophonist Sean Nowell.

But now, I would like to go back to my original concept, a fine blend of electric and acoustic, symbolically representing civilization and nature, and give it some time to develop. It has cultural and conceptual significance to me, perhaps because I am a Japanese native and it is an important theme for me to seek a well-balanced way of living in today's world that is losing its balance. I am not a lohas guru who would preach you how to live a sustainable life, and I am not that disciplined myself. But still, the idea of living in harmony with nature, rather than against it, is something I naturally cherish and would like to promote.

With this new project MUSOH, I would like to further explore the band sound that carries the best of both worlds. Color, texture and power of electric meet airiness, directness and warmth of acoustic. They all are going to live together, breathe together and make music together. I look forward to delivering this beauty to you.
Posted by Yutaka Uchida at 2:33 AM No comments: